I guess Ryan is trying to start a farm this weekend he got Tanner 4 chickens! What the heck are we going to do with chickens?!? Ryleigh and Tanner love them though! On the other hand though the chickens hate Ryleigh and Tanner! 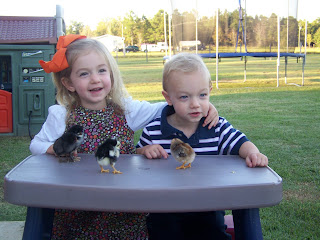 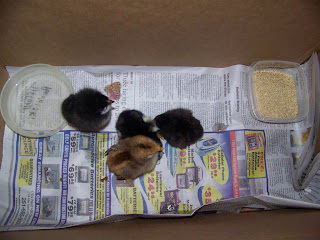 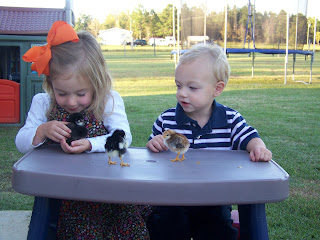 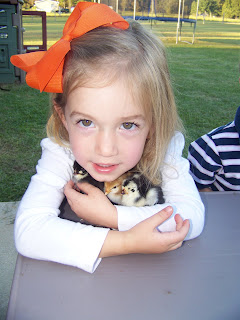 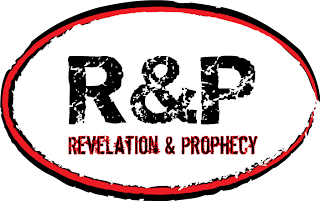 During our Wednesday night youth bible study Kris is going over the book of Revelation and Prophecy. He is covering what will come to pass during the last days before the rapture. I find this very interesting and a little scary. We live our lives like we have forever, but do we really? Are we the Terminal generation? That is what his first weeks sermon was on the "Terminal Generation." The definition of Terminal is the end of something, occurring at the end of a series, FINAL. This week we went over 10 signs of the coming of Jesus.

In Daniel 12:4 it says: "But you, Daniel, keep this prophecy a secret; seal up the book until the time of the end, when many will rush here and there, and knowledge will increase.”

A literal translation of this Scripture indicates that during the end time, or the terminal generation, an explosion of knowledge will occur. I think if we just look around we can see that this has clearly occurred. Cars, planes, cellphones, space travel, Internet, medical. We have came farther in the last 50 years as far as technology goes that anyone else did in the thousand of years that preceded our generation. Kris quoted someone Wednesday night but my hand was already going 90 to nothing I didn't have a chance to write their name down but the quote was "Knowledge without God can only produce smarter sinners."

2. Plague in the Middle East

Zechariah 14:12 says: And the Lord will send a plague on all the nations that fought against Jerusalem. Their people will become like walking corpses, their flesh rotting away. Their eyes will rot in their sockets, and their tongues will rot in their mouths.

If you think of when this was written and what they had to compare things to its very minimal. They didn't have all the technology and things we have today. But if you look at this verse it sounds a lot like a nuclear weapon. Something that we hear about on a daily basis in the Middle East. In some versions of this verse it says that their flesh will melt before their bodies hit the ground. That's exactly what would happen in a nuclear warfare.

May 15, 1948, when the United Nations announced their recognition of the state of Israel. Israel is described as a fig tree in Matthew; he claims that when Israel is a young tree, it will be reborn and growing, but, "as soon as its branch becomes tender and starts putting forth its leaves", the end times are at hand (Matt. 24:32-34).

So this says that when Israel is able to stand alone and is made into a state that the end is near.

The fact that Israel was made a nation in one day is proof, that this is a fulfillment of biblical scripture: "who has heard of such things... shall a land be born in one day... shall a nation be delivered in one moment... yet as soon as Zion was in labor she delivered her children" (Isa. 66: 8-10).

Another sign is when the Jews return home. They were driven out of their country for so long. they are since returning because they are able to worship now.

Israel's children are now, in our own time, returning home from Russia and other places in the world. This is consistent with biblical prophecy which states, "...as the Lord lives who brought up and led the descendants of the house of Israel from the north country and from all the countries where I had driven them... and they shall dwell in their own land"

5. Jerusalem no longer under Gentile rule

Prophecy says that Jerusalem will not be under Gentile rule during the terminal generation.

Revelation 11:3 and 7-10 says: "And I will give power to my two witnesses, and they will be clothed in burlap and will prophesy during those 1,260 days.” 7-10 When they complete their testimony, the beast that comes up out of the bottomless pit will declare war against them, and he will conquer them and kill them. 8 And their bodies will lie in the main street of Jerusalem, the city that is figuratively called “Sodom” and “Egypt,” the city where their Lord was crucified. 9 And for three and a half days, all peoples, tribes, languages, and nations will stare at their bodies. No one will be allowed to bury them. 10 All the people who belong to this world will gloat over them and give presents to each other to celebrate the death of the two prophets who had tormented them.

The existence of satellites, TV, radio, the Internet and all the modern wonders of instant communication exist is a direct sign of the terminal age. Instant communication must exist in order for all people to see God's "two witnesses" who will "prophesy one thousand two hundred and sixty days, clothed in sackcloth"

There are several examples to illustrate how deception is present in our world today. New Age theories and philosophy are nothing but deception. These are signs of the end times. There is no such thing as absolute truth anymore. We can't trust anyone these days, our government especially. We live in a world of new age religion and "Oprah" religion. On a side not I think she is a complete and total wacko and I think we shouldn't support someone with as much power as she has and is clearly leading people away from God.
Biblical prophecy states about the end times: "Everyone will deceive his neighbor, and will not speak the truth; they have taught their tongue to speak lies; they weary themselves to commit iniquity" (Jer. 9:5).

Jesus said that in the latter days "there will be famines, pestilence, and earthquakes in various places. All these are the beginning of sorrows" (Matt. 24:7-8).
Aids and the Ebola virus and other diseases are proof that we are the terminal generation.

God communicates with the "spiritually hard of hearing" through earthquakes. Some people believe that Israel's Messiah will be announced by an earthquake: "and he said, 'the Lord roars from Zion, and utters His voice from Jerusalem; and the pastures of the shepherds mourn, and the top of Carmel withers" (Amos 1:2).
The increasing occurrence of earthquakes is a sign that the great earthquake that will announce Israel's Messiah is at hand. Here are some numbers to look at:

From October 2005- September 2006 there were 4494 earthquakes. In one year there were double the amount that in the entire 19 century.

"But as the days of Noah were, so also will the coming of the Son of Man be" (Matt. 24:36-39).
In Noah's days, the destruction of humanity by the flood resulted because of man's wickedness. If you look at our world today "murders, rapes, kidnappings, assaults, child abuse, parental abuse, etc.," are evident in our daily lives as direct signs that the end is at hand.

When I heard that Kris was doing this series I was very excited. There are so many things in the Bible that we don't understand and probably never will. Revelation being one of the main ones. I like how he broke it down and showed how each of those 10 prophecies have already been fulfilled.

Posted by The Stokley Family at 10:53 AM No comments:
Email ThisBlogThis!Share to TwitterShare to FacebookShare to Pinterest

This child never ceases to amaze me! Every night before she goes to bed she prays and she'll start by saying "Dear Jesus I want to pray for" and then start rattling off names of whoever she can think of. Well at the end of her prayers on Saturday night she said what else can I pray about. I said well why don't you say I love you Jesus, so she repeated it. Then she said what else can I pray for and I said why don't you say Jesus forgive me of my sins. So she repeated that and then looked at me and said "what's sin" I told her that its when you do bad things that don't make God happy and that you have to ask for forgiveness. I'm not kidding when I say this, she then bowed her head and did her hands together and being as serious and as sincere as she could be she said "Dear Jesus forgive Tanner of his sins because he was really bad today!" I about fell over on the floor laughing! It was so funny!
Posted by The Stokley Family at 12:30 PM 1 comment:
Email ThisBlogThis!Share to TwitterShare to FacebookShare to Pinterest

We went to the corn maize in Mississippi this past weekend and Ryleigh and Tanner had so much fun. Mom, Aunt Lisa and Tammy all 3 went with us. They have so much to do there! They
have a hayride, corn cannon, playground, petting zoo, cow train, pumpkin barn, pig races and of
course the corn maize. Here are some pictures from the day. 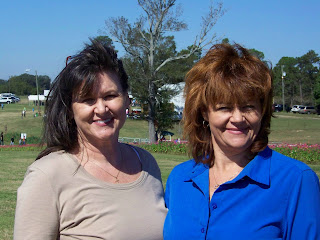 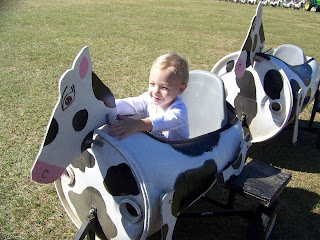 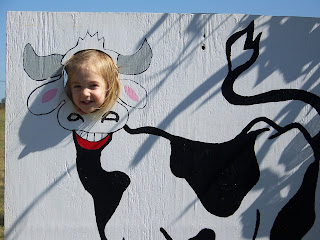 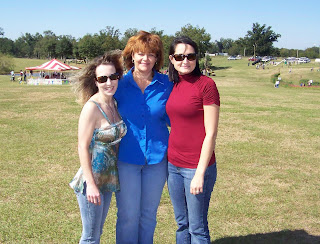 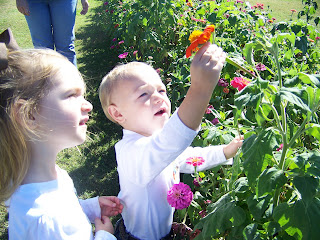 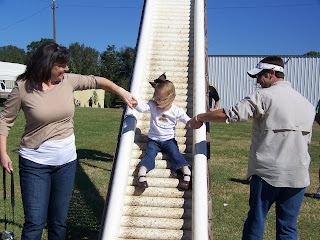 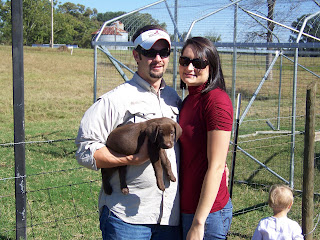 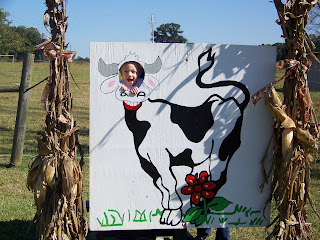 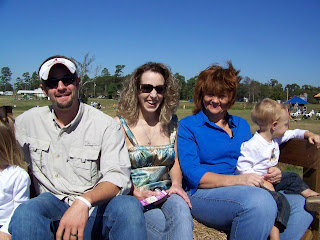 Posted by The Stokley Family at 12:04 PM No comments:
Email ThisBlogThis!Share to TwitterShare to FacebookShare to Pinterest

Against my better judgement I present to you the newest member of our family....GUS! 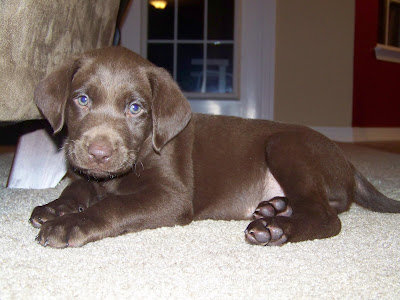 I know, I know he is so cute but believe me looks can be deceiving. He poops and pees in the house and he chews up my shoes! He is "suppose" to be Ryleigh's prize for being completely potty trained. I on the other hand think that it was just a way for Ryan to talk me into a dog.
So far I haven't had to take care of him but we will see how long this last!
Posted by The Stokley Family at 6:50 PM No comments:
Email ThisBlogThis!Share to TwitterShare to FacebookShare to Pinterest 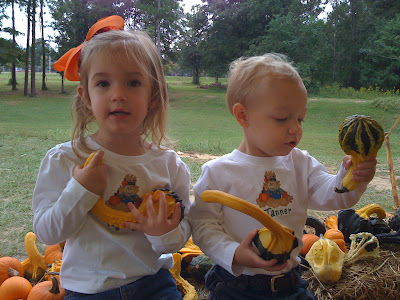 It is completely impossible to get a picture of Ryleigh and Tanner where they are both looking at the camera and smiling at the same time! Seriously its impossible! Sunday afternoon we went to the pumpkin patch and they had a lot of fun. They were allowed to pick out any pumpkin they wanted and they could each get one. After a very long time of trying to pick the big ones up they both decided to get the smallest one they could find and it only cost 25 cents! I know, we got off so cheap! The huge pumpkins were $16!
We are so glad its starting to feel more like fall around here. Ryleigh and I both hate being outside and getting hot so we are actually able to play outside a lot more now. I don't know if Lisa, Aunt Velvets friend from work, reads this or not but if so Ryleigh and I wanted to say thank you for the dress up clothes. Lisa's daughter Hart cleaned out her closets and Ryleigh was the lucky recipient of a lifetime supply of dress up clothes. Tanner is a little upset about it because we won't let him dress up like a princess. The other night though his Aunt Velvet let him dress up as a bride! Don't worry Velvet Ryan doesn't read the blog so your babysitting privileges won't be revoked! Here are a few more pumpkin patch pictures. We hope everyone is doing well! 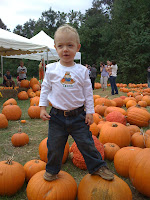 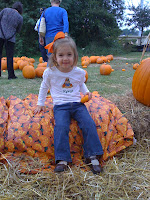 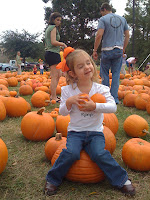 Posted by The Stokley Family at 8:02 PM No comments:
Email ThisBlogThis!Share to TwitterShare to FacebookShare to Pinterest
Newer Posts Older Posts Home
Subscribe to: Posts (Atom)

As for me and my house we will serve the Lord.

Train a child in the way he should go, and when he is old he will not turn from it.

Some of my favorites...